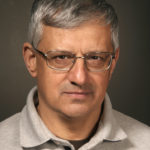 The aim of this educational programme is to develop capacities and skills of students to be able to undertake directors’ and assistant directors’ positions for all audiovisual genres. After an interdisciplinary education during the first academic year, educational priorities focus on the directing of documentaries and feature films, television commercials and music videos, reality TV formats and studio programs, etc.

There are also other disciplines combined in specialized modules in the field of: philosophy, religion, literature, theater, music, art, architecture, psychology, history of cinema, semiotics, theory of performing arts and others.

Education in this programme can only be at a full-time basis and lasts for 4 years. Students who have completed their credits under the programme curriculum have to pass an oral and written state exam in the respective field of study, as well as a final diploma defence of a practical director’s project (not shorter than 20 minutes).

Graduates of the programme acquire the educational qualification degree “Bachelor of Arts” with professional qualification “Film and Television Director”. Graduated students find job perspectives in creative and production companies in Bulgaria and abroad, in the creation and realisation of feature films, television series and adaptations, documentaries, corporate and educational films, music and advertising videos, online productions, video and multimedia projects. They can also continue their education further in Master programmes.

During their education, students get acquainted with the world practice and models, as well as with the professional terminology in English language, which allows them to work with/in foreign production, as well as co-productions in Bulgaria and abroad.

Applicants receive a script (same for all applicants), based on which they have to shoot and edit a film sketch, lasting up to 3 minutes (shot in NATFA’s studios). NATFA provides students in cinematography and editing, who technically assist the applicants in the shooting and editing of the sketch, as well as students among whom the applicants select performers for the roles in the sketch.

Exam duration: 300 minutes (the preparation time, rehearsals and shooting for each candidate is 180 minutes, for the editing – 120 minutes). Candidates who received a score that is lower than average (3.00) are excluded from attending the second exam stage.

Applicants’ filmed sketches that are admitted to the second phase in the examination process, are viewed by the Final Selection Committee. Members of the Committee are: the Rector, the Dean of the Faculty of Screen Arts and Program Directors of all programs in the Faculty. Applicants attend the screening of their sketches and after that analyze the results and answer questions, related to their artistic choices and decisions, the acting, storyboarding, mise-en-scène construction, visual and sound solution, and other components of the sketch. The Selection Committee also has a conversation with the applicants about the materials, included in their application portfolio. The aim of this exam stage is to understand as more as possible about applicants’ skills, potential capabilities, interests, overall cultural knowledge and background, ability for independent thinking and artistic reflections. Candidates whose score is lower than average (3.00) are excluded from participation in the final ranking.